Just another reason i do not play 40K

What is it with GW and their arms races at the moment. in warhammer they are able to easily justify most of the stuff that they bring out (except possibly the Luminark, why did they think a sun laser was a good bit of fluff) but in 40K the arms race is frankly getting ridiculous. 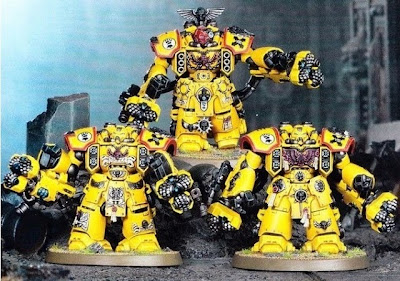 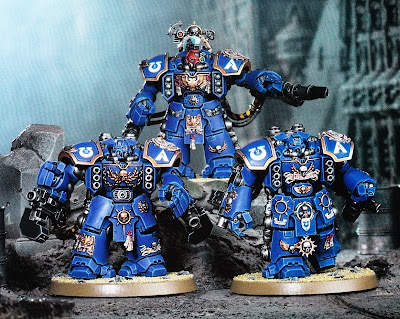 OMG ITS A SPACE MARINE IN A DREADNOUGHT IN A TERMINATOR!

Honestly how ridiculous does that look! What was their thought process for this!

"We want the impression of an unbreachable suit of armour. So put armour plates on ABSOLUTELY EVERYTHING. Oh but leave a small head, small heads are cool."
I honestly don't know what they were doing, unless their meant to be the precursors to obliterators i can see no point for these travesties.
Posted by Unknown at 15:37 4 comments:

Giants, no better than babys?

I love the smack talk that all war gamers seem to focus on when talking about monsters in their lists. "It will die straight away", "its got no saves/ too few wounds/ too random" or "its not worth its points compared to other monsters" are all things i have heard in regard to the oldest monster in warhammer, the giant.
I have not seen a giant on the other side of the field for over two years. I have run them once or twice, as i think they are a really hilarious addition that can cause utter bedlam in units it hits, if it doesn't roll a 1 (damn that yell and bawl).
Essentially the often pointed out faults of these behemoths are really racking up, those being...
However being the oldest monster i feel that they are the benchmark for other monsters. I often feel that the brainstorms for monsters in the GW studios go thus...
"We need a new monster for Dark Elves/ Wood Elves/ Brettonians/ Dwarves"
"How big?"
"Oh, ya know, giant sized"
"Why not make them the 4th army to be able to use them"
"NO, THEIR TERRIBLE NOW, give it giant stats but with wings and regen and armour and..."

Poor poor giants, losing the monster arms race. Being relagated to a fluffy little (well, not really) niche unit to be tromped out only when whole armies are being fielded.

What needs to happen to bring them back into a useful unit in the eyes of the general public. I have a solution which i doubt will make it broken, but will make it a feared opponent once more on the battlefield. and that is...

Ouch, i know, maybe a 20 point increase and slap that on him. Now you have to think twice before slagging him off. I dunno, what do you, the warhammer smack talkers, think?
Posted by Unknown at 05:11 2 comments: 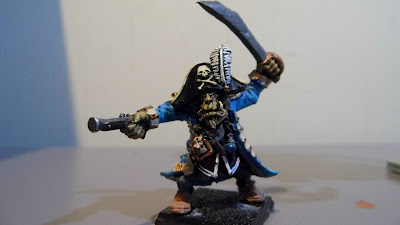 We'ez been waiting too long ta land and come kick some of dem 'Ummie bastards in da clangerz. but me new first mate's joined our rankz and is ready to walk over all dem who thinkz that Orks are an easy pickingz. 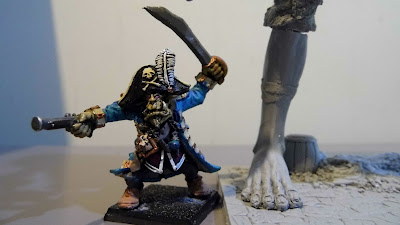 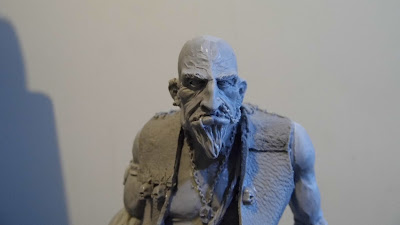 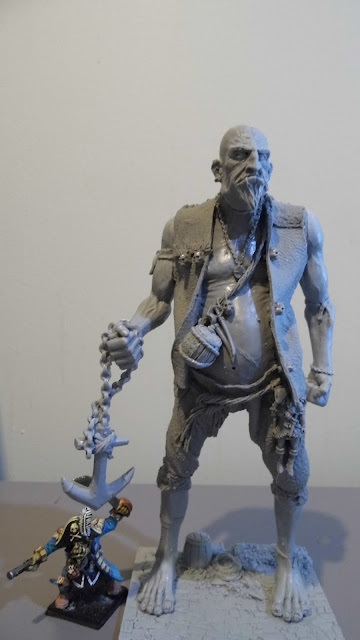 Hur Hur, Dis is gonna be good. WAAAAAAGH!
Posted by Unknown at 20:46 5 comments:

A field of slaughter

Call to arms has come to a close, and the podium positions were so tight going into the final round that any of the top 8 could have taken out the tournament. However, as predicted, the scion of Nurgle Sam Campbell took out the top prize, closely followed by Sam Whitt in second and Peter Dunn in third. Sam also took out the best painted prize with his beautiful looking Warriors of Slannesh list and (due to an 8 way tie for best sport) the prize went to... ME.

the Vampires went much better than i ever thought i could do, though their were no real major victories. The Vampire Lord also managed to discover his new name, Sceadugengan, the shadow walker.
without further adieu, here were the games....

Game One: Dawn Attack
Opponent: Fern Campbell
for orcs and goblins ferns list was interesting, chariot mash, pump mash, artillery mash and mangler mash backed up by a small unit of savages and a HUGE unit of poisoned Night Goblins.huge units of goblins should not instill as much fear in the dead as they caused in this game, but since her deployment allocations were terrible (her bus on the right flank, most of the artillery on the left flank with only one mangler to protect it) i went for blood and pushed over the left flank, while the Hexwraiths ran in and held up her goblin bus for three turns. a nod to fern that she should have been able to take off the zombie dragon, but her artillery, though it could hit quite reliably, did a total of 2 wounds to the dragon the entire game. bad plays from me gave her my units of Hexwraiths and the Black Coach. as well as my chaff.
Final Score: 12-8 victory (better luck next time Fern)

Game Two: Blood And Glory
Opponent: Joel Van De Ven-Long
Empire with dual chickens, dual cannons, engineered hellblaster and a steam tank backed up by Knights and a heavens wizard. i never do well in blood and glory at tournaments (best outcome so far has been 1-19) so when i heard Joel's name i groaned inside, expecting the cannons and a light council to take me off. however this game could not have gone much better. the Zombie dragon was cannoned off first turn but Joel failed to get Sceadugengan, who bunkered with the skeletons for the rest of the game. with only two magic missiles on hand the celestial wizard could not contain the Hexwraiths, and when a Necromancer left his unit to sacrifice an inbattled unit of zombies to get a 30" Boosted vortex of doom through both units of chickens, his steam tank and his Halbardiers (who had 8 ranks) Joel was forced to fall back to Damage control. the game ended with neither side broken and both of us severely mauled. however this did mark my first ever victory over Joel, so i am certain a rematch will be saught.
Final Score: 12-8 victory

Game Three: Battle For The Pass
Opponent: Ryan Lister
Slannesh Daemon Prince, Unkillable Disk BSB, two Hell Cannons, and almost as much chaff as me. Ryan's Daemon prince completely dominated this game. Ryan could not fail an armour save on his daemon prince in Sceadugengan's titanic battle with him. over 6 rounds of combat he did a total of 1 wound to me to no wounds back. he must of got sick of the fight for he very underhandedly (hiss) he sent his BSB into the flank to crumble me. with a fire wizzard and his cannons mercilessly cutting down my Hexwraiths and my Skeletons engaged in the flank and front i had no choice but to concede. he had taken off everything but the zombies and i had a measly unit of Marauder Horsemen.
final score 0-20 Loss

Game Four: Meeting Engagement
Opponent: Neil Williamson
nothing went right for Neil in this game. he was rocking an almost exclusively close combat wood elves list that made use of a big block of Eternal Guard, a Treeman, two units of Wild Riders, a noble on an Eagle and a general on Dragon. his lack of wizards and and only one set of strangle root attacks meant that he could not harm the hex wraiths without being attacked in return. turn two saw Neils worst bit of luck came right off the bat when his general failed a 5" roll to charge the skeletons, allowing them to murder the eagle noble. compounding this in the very next round was the hex wraiths he had reduced to 4 men with strangle roots running over the Treeman and doing 3 flaming, no armour save, magical wounds that instantly felled him. since that point nothing seemed to go right, culminating in him losing his last unit of Wild Riders to a unit of zombies in the last turn. the game was also memorable for a pigeon shitting on my jacket half way through the day.
final score: 15-5 victory

Game Five: Battle Line
Opponent: Tane Woodley
when i first heard those words come out of James's mouth i groaned. Tane was rocking Dwarves and i have never come out well against Dwarven artillery. he had a Bugmen list of two Ranger units, two large miner blocks, a minor miner block backed up by a rune lord on anvil and two artillery pieces. on turn one, even though he had only one cannon in sight Tane managed to take off my zombie Dragon and put Sceadugengan on one wound (>.<) but misfired his anvil. in order to save him i opted to three dice invocation to put him back on full health... and miscast. Tanes quip "miscast never really do anything" then saw me dimensional cascade myself off the board. thankfully damage to my army was light as i passed a raft of Ld 5 tests. at this point i turned around and tried to outrun his dwarven advance (i know, its very rare dwarves find an opponent that is forced to go slower than them.) then in his turn three Tane once more misfired his anvil on basic power (2+). my quip "stop choosing to roll ones" saw him role a one and blow himself up... a cat and mouse chase ensued and in the last round of the last turn he finally got my wizards, and once more every unit passed their checks. a really fun game (i know, Dwarves give a fun game, who would have thunk it) and my vote for best opponent of the weekend.
Final Score: 4-16 Loss

final placing saw me tied with Fern, but because of a lack of flock on my bases she nobbled me at the post for 2 points on painting, leaving me sitting on 20th position and her on 18th. a great weekend all up.