Perusing the new book is great fun, Matt Ward has expanded on the Dark Elves history (albeit with a very strong biased, which i love) and created great rivalries between the major factions of the cities. The best part though is the rules themselves. Yes we know witch elves are now very strong, and that murderous prowess has turned the dark elves into the nastiest combat troops of the Elven kingdoms. however their are some small gems i think were not covered properly in the Kiwihammer podcast's review (if you haven't listened to it yet, i recommend it, though put a bit of time aside if you are going to http://kiwihammer.co.nz/kiwihammer-episode-5-dark-elf-review/)


I: High Beastmaster on Scourgerunner Chariot 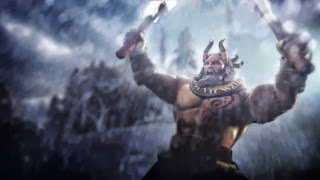 now everyone's kinda lampooned the Scourgerunner as a waste of points, well their kinda true for the normal version, but as a mobile artillery piece when a High Beastmaster is mounted on it could be a good time. BS 7 will mean that long range and move will still hit on a 2+, and at S7 bolt thrower (meaning it can pierce ranks and allows no armour saves doing D3 wounds) makes it a strong contender for anti Daemon Prince, just pepper it with the repeaters first to remove that annoying charmed shield.

Breezed over in the podcast, i reckon these guys are going to end up being the favorite choice over the unpredictable Witch Elves in my opinion. They have lost their slaving rule (unless Lokhier is in the unit) and their sea serpent banner and have gone up 1 point when armed (additional hand weapon or repeater crossbow pistol, your choice depending on what you need. Probably the additional hand weapon though), giving them the same cost as a Witch Elf. Where a Witch Elf is the glass cannon though the corsair is the rock you can build a reliable force around. The sea dragon cloaks now just grant scaly skin 5+ straight, with no drop in combat, making them a reliable 4+ armour save to back up their 2 attacks. Also not having frenzy makes them easier to control, not having to worry about racing off after a fleeing enemy if you don't want too. Personally they would be my first choice over the Witches.

III: Executioners are now your pals

OK Executioners were covered extensively. Lets face it the can openers are going to be everywhere  nowadays but it is a buff that was not mentioned that i am addressing (and will be exploiting). Their is no longer the Khainite rule in the army book. For those who never played Dark Elves under previous additions the units marked Khainite could not be joined by non Khainite heroes, limiting you considerably to Assassins and Hags. Khainite however is history, and though the Witch Elves have a special rule for any uninducted heroes their is nothing to stop you putting Masters, Dreadlords or Sorceress's into the unit.

IV: The armour of grief 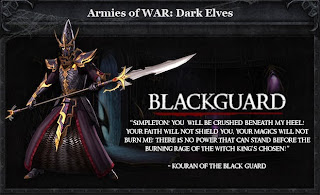 Kouran Darkhand is a great anomalie in the dark elf book. not only does he make Black Guard good again, but the wording of his equipment might make him one of the most hilarious suiciders in the book. with the usual always strike first, murderous prowess and eternal hatred that marks his profession, he also grants unbreakable to his unit (always handy). however the combo of the Crimson Death and the Armour of Grief is brilliant. 3 ASF S6 attacks that re-roll 1's to wound will hurt alot, but then when you go to strike him back he gets to inflict an instant S5 hit on his opponent for every attack that HITS him. Not wound. HITS. the opponent i assume will still be able to wound if he is killed by these out of sinc attacks but it allows you to play some great mind games with anyone who would dare challenge the Captain of the Black Guard. 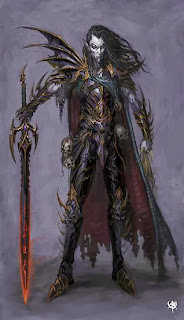 The tales of Malus Darkblade are possibly one of the most successful Black Library series, and was the catalyst into my love of the Dark brethren. His ruthless exploits, his backstabbing, his arrogance and his hate made for a series of novels that oozed with character. Now the Darkblade has shrugged off the poor Herodom of the last Army book and has stacked his claim to Lordship. One of the few non Black Guard to have the Eternal hatred rule (alongside Malekith himself) Malus not only sports an epic profile and constant re-rolls to hit (no matter what) but also a weapon that allows no armour save and re-rolls to wound. Match this with the power of the Daemon Tz'arkan and you have a character who is possibly the second best glass cannon in the new book (close behind Hellebron herself). Not only this but Spite has been buffed. 3 attacks (one more than the average Cold one like last incarnation) and again removing stupidity from his unit will make Malus and his steed a must for the Black Knight bus these days, but Spite also now has eternal hatred too, the only creature in the book to have any form of re-roll. I really hope to see Malus gracing the battlefields a lot more than he did, for he is now well and truly worth his points.
Posted by Unknown at 20:54